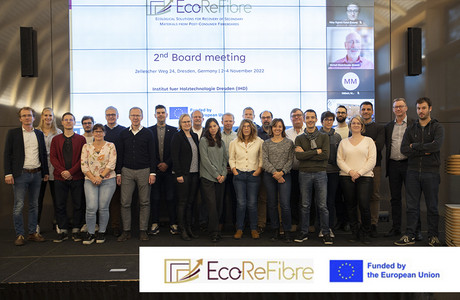 The Institute of Wood Technology is a partner in the EcoReFibre research and development project. The aim of the project is to use intelligent sorting and processing technologies to produce fibres and other particles from waste wood and waste fibreboard and to feed these into the wood-based material production process.

In this way, up to 25 % of the virgin fibres currently used for fibre material production are to be replaced by recycled fibres by 2026 and new types of products developed. To achieve this goal, a renowned consortium of research institutes, associations, manufacturers of wood-based materials and equipment manufacturers, a total of 20 institutions from 7 European countries, was formed.

The IHD brings its knowledge in the sub-project of fibre production from waste wood and fibre boards, among others. In addition to process adaptations, this also includes plant modifications in the area of defibration.

On 3 and 4 November 2022, the 2nd project meeting took place at the IHD in Dresden. The results achieved so far were discussed in various workshops and the next tasks were specified.

The project is funded by the European Commission within the framework of the "Horizon Europe" programme.