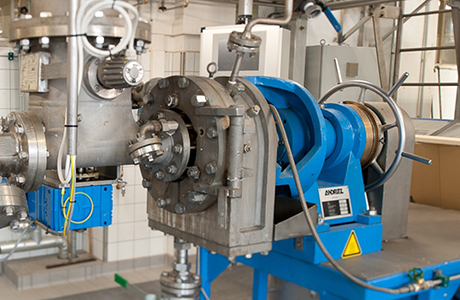 According to the assessment of the Expert Agency for Renewable Resources, noon-profit (FNR) acting as the project management agency the basic result is “... that natural insulating materials have reliable, that constructions are reliably calculable and can be used in almost all areas of application. Natural materials can be used to construct durable and safe buildings in a calculable way. Standards and statutory building regulations can now be adapted and the way paved for more NawaRo insulation materials in construction”.

The project involved twelve research partners and numerous industrial companies and associations; it was coordinated by the Fraunhofer Institute for Wood Research (WKI). The IHD contributed in the fields of “thermal insulation” and “moisture protection”.

In the field of thermal insulation, IHD experts dealt with heat transfer, measurement methodology and structural optimisation of wood-fibre insulation materials. In addition to other things, thermal and temperature conductivity, density profiles, porosity as well as fibre distribution and orientation were investigatedd. The thermal conductivity measurements confirmed that the difference in temperature results in a shift in moisture, influencing the result. Proposals for the improvement of the measurement methodology were developed and verified in round-robin tests. In defibration tests at the IHD’s Technical Centre, called the Technikum, it was determined how the insulating effect of wood fibre materials can be improved by reducing the milling gap during the actual pulping of the fibre material.

In the field of moisture protection, investigations were carried out into microbial background concentrations, mould resistance and the development of test methods. In addition, the IHD contributed to the work of the WKI on the rapid detection of mould fungus infestation by means of the gas analysis. The microbial background concentration of 14 NawaRo insulation materials was below the limit values of 105 CFU/g (mildew) or 106 bacteria/g, respectively. Thus, they proved to be hygienically inconspicuous. The general limit values for building materials can therefore also be applied to NawaRo insulation materials. Standard testing confirmed the manufacturer’s specifications regarding mould resistance. Moreover, the study of “Insulation Materials and Mould” was elaborated, compiling information from  building law aspects, from the building technology and building biology. The study forms a basis for further research and standardisation work. The project also resulted in the cooperation of the IHD in the European standardisation committee for thermal insulation materials CEN/TC 88. Its task is to develop a mould test standard applicable to all thermal insulation materials.

The final report on the joint project is currently under its final review and will then be made available in the FNR project database on the Internet (www.fnr.de).